Radiation resistance is a major cause of death in cancer patients. Cancer cells react during radiotherapy by re-programming specific cell functions that may confer resistance to radiation. The understanding of this complex process is hindered due to the lack of appropriate study models. We describe an experimental development of a radioresistant isogenic cancer cell line, and its molecular characterization.

A431-cultured cells were irradiated for 7 month until 85 Gy. Then, a selected single cell was left to grow as stable A431-R cell line. Clonogenic assay was used to determine cell survival, the α and β parameters of the LQ model, and the mean inactivation dose. The DNA repair ability of cells was evaluated by pulsed-field electrophoresis method. Differential effect of fractionated radiation was ultimately tested in xenografts. Furthermore, we used a wound healing assay, Western blot for EGFR, AKT and ERK1/2 and ELISA test for vascular endothelial growth factor (VEGF) secretion. Finally we explored CD44 marker and cell cycle distribution.

In this model, the emergence of radiation resistance was associated with the acquisition of biological traits that support more aggressive behaviour of cancer cells. We have generated a model that will be useful for mechanistic studies and development of rational treatments against radiation resistance in cancer. 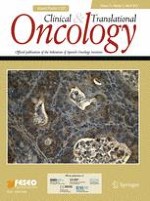 DeCIDE and PARADIGM: nails in the coffin of induction chemotherapy in head and neck squamous cell carcinoma?

Retrospective study assessing the role of MRI in the diagnostic procedures for early breast carcinoma: a correlation of new foci in the MRI with tumor pathological features