Development and validation of nomograms to predict the recovery of urinary continence after radical prostatectomy: comparisons between immediate, early, and late continence | springermedizin.de Skip to main content
TOOLBAR 1 2 3 4
SUCHE MENÜ 1 2 3 4

Few studies have been conducted on the serial evaluation of predictors for recovery of urinary continence (RC) after radical prostatectomy (RP) among same cohort. We developed and validated nomograms to predict immediate (≤1), early (≤3), and late (≤12 months) RC from a contemporary series and compared each nomogram with regard to the significance of predictors for RC.

Among consecutive men who received robot-assisted or open retropubic RP between 2004 and 2011, 872 (74.7 %) and 296 (25.3 %) were randomly assigned to subcohorts for the development of nomograms and for the split-sample external validation. The final multivariate model was selected based on the stepwise procedure, and the regression coefficient-based nomograms were developed based on final models.

Age at surgery, membranous urethral length (MUL), and robot-assisted RP were significant for RC at 1, 3, and 12 months. Saving the neurovascular bundle (NVB) and prostate volume were significant only for RC at 12 months. Odds ratios for age and MUL were constant over time, whereas the odds ratio for robot-assisted surgery decreased over time. Each developed nomogram was reasonably well fitted to the ideal line of the calibration plot. The split-sample external validation of nomograms indicated 63, 65, 71 % accuracy for each RC time point.

We developed nomograms for RC at each time point after RP and validated adequately. Saving the NVB and prostate volume may affect only late RC after RP. In contrast, age, MUL, and robot-assisted surgery seem to be consistently associated with immediate, early, and late RC. 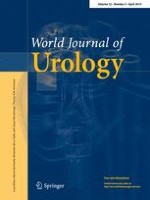 Clinical and pathological nodal staging score for urothelial carcinoma of the bladder: an external validation