The aim of the study was to correct for partial volume effect in positron emission imaging studies which is the most influential factors using three-dimensional (3D) representation of the recovery coefficients (RCs) to improve standardized uptake value (SUV) calculations.

Several phantom studies were conducted at significantly wide range of lesion contrast, range 2:1 up to 15:1. It was then classified into two groups: one for generating 3D function taking into consideration the sphere size as well lesion contrast whereas the other group was used for functions validation. A segmentation threshold algorithm for lesion delineation and volume determination was generated based on lesion contrast and lesion size. In addition, five 3D functions of the RC of the SUV were formulated considering lesion size and lesion contrast. Validation of the new algorithms has considered both phantom and clinical studies.

The error in threshold 3D function was well below 10%. For lesions ≤ 2 cm in diameter, there was no statistical difference of the functions developed for SUVmax as well as those functions generated for SUVmean. However, the median SUVmax has increased significantly when compared with data before correction. For SUVmean, the increase in median value was also significantly high.

It has been successful to generate 3D mathematical formulations of the SUV RC taking into consideration the most influential factors including lesion size and lesion contrast. Validation studies were suggestive of the good performance of the new mathematical algorithms generated to correct for PVE. However, further studies are underway to ensure the performance of the proposed algorithms in clinical PET studies. 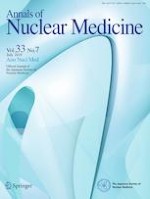