Hepatitis B virus (HBV) infection is one of the main concerns in blood and marrow transplantation (BMT) patients for possible breakthrough hepatitis. Active recipient immunization against HBV was found to be ineffective and many studies had showed that the adoptive transfer of immunity against hepatitis B virus would be possible by BMT with unknown duration and mechanism. A 46-year-old female patient with chronic hepatitis B had persistent detectable HBV DNA and positive serum hepatitis B e antigen (HBeAg), even while on long-term lamivudine and adefovir therapy. She received allogeneic matched unrelated donor peripheral blood stem cell transplantation (allo-MUD-PBSCT) for her refractory acute myeloid leukemia (AML). The HBV DNA became undetectable and she developed HBeAg seroconversion after PBSCT. Her hepatitis B surface antigen (HBsAg) remained positive, which disappeared later, along with the development of antibody to HBsAg after one shot of donor lymphocyte infusion (DLI) as a boost against her AML. In summary, BMT from an immunized donor would probably bring adoptive immunity against HBV. This adoptive immunity might be further enhanced by the subsequent DLI. 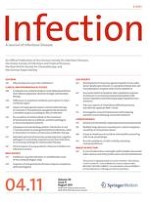 Healthcare-acquired infections in rehabilitation units of the Lombardy Region, Italy

Impact of inappropriate empiric antimicrobial therapy on outcome in Pseudomonas aeruginosa bacteraemia: a stratified analysis according to sites of infection