Canine hemotropic mycoplasmas occur worldwide and are caused by the uncultivable hemotrophic bacteria; Mycoplasma haemocanis (Mhc) and Candidatus Mycoplasma haematoparvum (CMhp). In this study, the occurrence and differentiation of both causative agents in dogs that originated from southern Iran were investigated by employing restriction fragment length polymorphism (RFLP)-PCR and simple multiplex PCR methods based on RNase P RNA (rnpB) and 16S rDNA markers, respectively. The results showed that the prevalence of Mhc and CMhp among 100 examined samples were 6.0 and 4.0 %, respectively. Both PCR assays provide valuable molecular tools for the differentiation of CMhp and Mhc DNA in canine blood samples compared to 16S rDNA sequencing results. Also, sequence analysis of the genes (rnpB and 16S rDNA) and subsequent phylogenetic analysis were performed for both hemoplasmas in the Iranian dogs’ population. Comparison of the Iranian sequences with those for other isolates of canine hemoplasmas deposited in the GenBank database revealed a higher interspecific variability for rnpB marker (up to 31.22 %) compared to 16S rDNA sequence (up to 17 %). 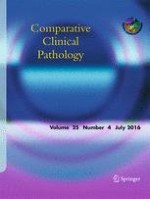 Pathology of emphysematous reticulitis in cattle: report of two cases and comparative overview of similar or identical conditions