This report describes the development of a species testing system based on the diversity of nucleotide sequences in mitochondrial DNA (mtDNA) among species. Five species, human, cow, pig, dog, and cat, were considered. The partial nucleotide sequences in 16S ribosomal RNA coding region were chosen as the target for discriminating the species. The sequence diversities of this approximately 400 bp long region ranged from 15.7 to 24.1% among the five species. Sequencing analysis of this target on 50 individuals of each species (53 for dogs) revealed that the nucleotide sequences were well preserved within species. Species-specific PCR for each species was also designed, and satisfactory results with regard to both sensitivity and specificity were obtained. A validation study with DNA extracted from bovine bone exposed to the environment revealed that the PCRs designed in this study worked correctly. From the results obtained, it was shown that this testing system could be a good tool for species identification. One successful case report is also demonstrated. 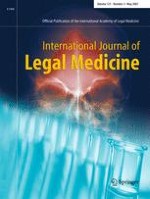 Finite element analysis of impact and shaking inflicted to a child

Hypoxic changes in Purkinje cells of the human cerebellum