A 35-year-old woman (HLA-DR3-DQ2 homozygous) was diagnosed with juvenile idiopathic arthritis (rheumatoid factor-positive) at 15 years of age. Her mother had been diagnosed with type 1 diabetes at 29 years of age. Over the years, the disease appeared to be largely resistant to therapy; despite treatment with sulfasalazine, auranofin, hydroxychloroquine, methotrexate, azathioprine, penicillamine, prednisone and ciclosporin consecutively, she developed severe joint destruction for which she received several joint replacements, including both shoulders and knees. In 1997, she participated in a trial on TNF-α antibody therapy (adalimumab) for approximately half a year, without clear benefit. In 1999, she received five cyclophosphamide infusions, which had only a partial, temporary effect. The only approach that suppressed her arthritis was the regular injection of methylprednisolone. At the end of 2000, she was started on etanercept, a subcutaneously administered TNF-α antagonist, at a dose of 25 mg, twice a week. This treatment had a clear beneficial effect on her arthritis. Her 28 joint disease activity score (DAS28), a validated composite score [ 2], substantially decreased. Methylprednisolone administration was successfully tapered before finally being completely discontinued, and she needed fewer non-steroidal anti-inflammatory drugs. In 2000 and 2001, measured plasma glucose levels (non-fasting) were 5.7 and 6.1 mmol/l. The patient continued to report a beneficial effect of etanercept treatment, although the therapy did not completely suppress her joint inflammation.
Anzeige
In 2003, she noticed polydipsia and polyuria, genital candida, generalised fatigue and a 3 kg loss of body weight. Her blood glucose level was >25 mmol/l, and her HbA 1c was 11.6% (reference value 4.8–6.1%). The level of GAD autoantibody (GADA), determined by ELISA (RSR, Cardiff, UK), was very high at 1,312 U/ml (normal value <5 U/ml). The patient was put on multiple daily insulin injections (combination insulin aspart and insulin glargine), which resulted in the rapid relief of symptoms, normalisation of blood glucose levels and HbA 1c, and an increase in weight. The patient currently requires a daily dose of insulin of ~0.75 U/kg.
To determine whether the appearance of GADA preceded etanercept therapy, earlier samples were screened for this antibody. Retrospective serology revealed the presence of GADA in 1997, prior to the patient’s participation in the adalimumab trial. During the course of TNF-α antibody administration, the GADA titres rose tenfold, to exceptionally high titres (Fig.  1). IA-2 autoantibodies were not detectable at any time point.
×

We thank C. Popa (Department of Rheumatology, Radboud University Nijmegen Medical Centre, the Netherlands) for retrieving stored blood samples. B. O. Roep is supported by a VICI award from the Netherlands Organisation of Health Research and Development (ZonMW). 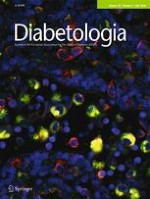 Pancreatic beta cell function persists in many patients with chronic type 1 diabetes, but is not dramatically improved by prolonged immunosuppression and euglycaemia from a beta cell allograft

Prevention of spontaneous immune-mediated diabetes development in the LEW.1AR1-iddm rat by selective CD8+ T cell transfer is associated with a cytokine shift in the pancreas-draining lymph nodes

Are substrate use during exercise and mitochondrial respiratory capacity decreased in arm and leg muscle in type 2 diabetes?