The objectives of this study were (1) to examine the prevalence of diabetes and hypertension among church personnel in North-Eastern Democratic Republic of Congo, and (2) to identify socio-demographic factors and health behaviors that are associated with these outcomes. Data for this study were obtained from a sample of 670 pastors and their wives, and other church workers in North-Eastern Congo in 2014/2015. Pearson chi square and binary logistic regression analyses were conducted with diabetes status and hypertension as outcome variables. A little over one in ten respondents (11.3 %; n = 76) were diabetic. Of the 76 respondents with diabetes, 49, or approximately two-thirds (64 %) were aged 50 and over. Of the respondents aged 70 and above, 85.5 % were found to be hypertensive. Adjusting for all other predictors, respondents who were older, market women/homemakers, and those who used vehicles as opposed to walking or biking as their means of transport were more likely to be diabetic. Also, respondents who were older or overweight were more likely to have hypertension. The paper discusses the results and their implication for public health policy on diabetes prevention, particularly among older individuals who are religious workers in Africa. 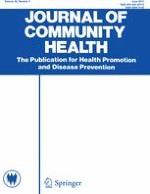 Water Pipe (shisha) Use and Legislation Awareness Against Shisha Smoking Among Medical Students: A study from Karachi, Pakistan

Prostate and Colorectal Cancer Screening Uptake among US and Foreign-Born Males: Evidence from the 2015 NHIS Survey