The imaging appearance of neoplastic hematoma can be complicated by the presence of a large hematoma, even on magnetic resonance imaging (MRI). We describe the role of MR perfusion (MRP) in detecting neoplastic hematomas in patients with intraparenchymal hematoma (IPH).

A retrospective review was performed for consecutive patients with IPH, where MRP was performed. Routine, post-gadolinium MRI and MRP were analyzed. All patients were either operated on for evacuation of IPH or followed up on imaging. The MRP parameters of cerebral blood volume (CBV) and cerebral blood flow (CBF) and pattern of enhancement (peripheral linear vs. nodular) were recorded. Sensitivity, specificity, positive (PPV) and negative predictive values (NPV) were calculated for these parameters for diagnosing neoplastic hematoma.

In our small series, the combination of peripheral linear enhancement and increased CBF and CBV showed 100% sensitivity, specificity, PPV and NPV for diagnosing a neoplastic hematoma. These findings need to be validated in a larger study. 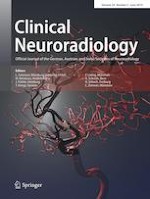 Dislocation of a WEB Device into the Middle Cerebral Artery