Colonoscopic evaluation of mucosal tissues after allogeneic hematopoietic stem cell transplantation (HSCT) is very useful in evaluating pathogenesis and diagnosis of intestinal graft-versus-host disease (GVHD). However, information on the timing and sites of biopsies and the immunohistological evaluation of mucosal tissues for diagnosing intestinal GVHD, especially following reduced-intensity (RIC) regimens, remains very limited. A total of 33 patients with histologically proven GVHD after allogeneic HSCT with RIC (n = 23) and myeloablative conditioning (MAC, n = 10) regimens were enrolled in the present study. Colonoscopy was performed due to gastrointestinal symptoms, especially diarrhea and anorexia. Sites of biopsies with the worst histopathological grading were the terminal ileum in 67 % of patients. In the RIC group, the onset of diarrhea prior to colonoscopy examination was later (median: RIC, 57 vs. MAC, 27 days) and the number of patients who developed abdominal pain tended to be higher (RIC, 70 % vs. MAC, 30 %). A lower number of CD4+ cells and a higher ratio of Foxp3+ cells to CD4+ cells were detected in the involved lesions of intestinal GVHD following RIC. These differences in the RIC and MAC groups suggest that regimen-specific therapeutic strategies are required for diagnosing intestinal GVHD. 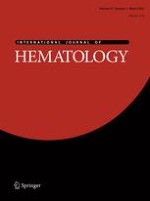 Histone deacetylase inhibitors in the treatment for multiple myeloma