To characterize the current evaluation, and efficacy of treatments in patients with the primary complaint of nocturia.

A retrospective chart review was performed of new patient encounters seen in a tertiary urology practice from May 2010 to September 2016 with the primary diagnosis of nocturia (ICD-9 788.43 and ICD-10 R35.1).

595 patients were identified. 403 met inclusion criteria. The median patient reported that nocturia episodes were 4 (1–20). 192 patients (48%) reported previous treatment for nocturia. After the index visit, a bladder diary (BD) was utilized in 50% of patients, with a 62% (n = 124) completion rate at follow-up visit. On BD analysis, the most common etiologies of nocturia were nocturnal polyuria 76% (n = 90) and overactive bladder in 21% (n = 26). Patient reported improvement with therapy after BD completion was 46% (n = 34), similar to patients without voiding diaries (43% improvement, n = 153). Anticholinergics and alpha blockers were the most commonly recommended drug, but no specific medication was associated with nocturia improvement. Oral desmopressin was used in 5% of patients.

Nocturia is a common condition and very commonly patients have sought treatment prior to presentation. Bladder diaries were recommended to half of the patients. Patient reported that improvement did not seem to correlate with completion of a bladder diary. Though most patients had NP the use of desmopressin was very low. Current treatments used in managing nocturia may lack efficacy. 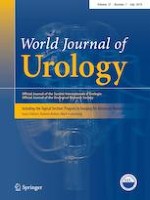 Cholecalciferol for the prophylaxis against recurrent urinary tract infection among patients with benign prostatic hyperplasia: a randomized, comparative study

Impaired sleep is associated with low testosterone in US adult males: results from the National Health and Nutrition Examination Survey

Aquablation of the prostate: single-center results of a non-selected, consecutive patient cohort

PSMA PET applications in the prostate cancer journey: from diagnosis to theranostics

Fiducial markers: can the urologist do better?