Diagnosis and Treatment of Metastases to the Thyroid Gland: a Meta-Analysis | springermedizin.de Skip to main content
TOOLBAR 1 2 3 4
SUCHE MENÜ 1 2 3 4

The thyroid is a rare site of clinically detectable tumor metastases; even though the gland is a highly vascularized structure, the frequency of metastases in the routine practice is less than 0.2% of all thyroid malignancies. The purpose of our meta-analysis is to evaluate the frequency of metastatic diffusion from other primary tumors to the thyroid gland and to suggest the best possible treatment through an evidence-based study. Relevant studies were identified by searching the following databases: PubMed, Scopus, and Web of Science. We selected all English-written articles published from 1995 to 2015. Studies were considered eligible if they reported the timing of metastatic spread and the site of the primary tumor in respect to the diaphragmatic region. Case reports were not included. Twenty-eight studies accounted for 514 patients. The rate of metachronous metastases was 69%. Fifty-three percent of primaries originated from the infradiaphragmatic region. Fine needle aspiration biopsy (FNAB) was done in 154 patients and 195 patients were treated mostly with surgery. A prevalence of primary tumors from the infradiaphragmatic region and of metachronous metastases was observed. Knowledge of the clinical history and the ancillary techniques can improve the sensitivity and accuracy of FNAB. Thyroidectomy may be considered a more effective treatment than radio-chemotherapy. 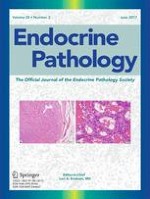 The Flip Side of NIFTP: an Increase in Rates of Unfavorable Histologic Parameters in the Remainder of Papillary Thyroid Carcinomas

Metastatic Follicular Thyroid Carcinoma and the Primary Thyroid Gross Examination: Institutional Review of Cases from 1990 to 2015

Adrenocortical Carcinoma Arising in an Adrenal Rest: a Case Report and Review of the Literature