Autoimmune pancreatitis (AIP) has been established as a special entity of chronic pancreatitis (CP). However, its clinical distinction from pancreatic cancer and other types of CP is still difficult. The aim of this study was to evaluate the efficacy of pancreatic core needle biopsy for the diagnosis of AIP. In 44 core needle biopsy specimens, we assessed the following microscopic features: granulocytic epithelial lesions (GELs), more than ten IgG4-positive plasma cells/HPF, more than ten eosinophilic granulocytes/HPF, cellular fibrosis with inflammation, lymphoplasmacytic infiltration, and venulitis. All biopsies that showed four or more of the six features (22 of 44) were obtained from 21 of 26 patients whose clinical diagnosis and follow-up were consistent with AIP. All non-AIP CP patients (n = 14) showed three or less than three of the features in their biopsies. GELs were only observed in biopsy specimens from AIP patients. In conclusion, our data indicate that the six criteria we applied were able to recognize AIP in 76% of biopsy specimens using a cut-off level of four. When the specimens that revealed only three features but showed GELs were added, the sensitivity rose to 86%. Pancreatic core needle biopsy can therefore make a significant contribution to the diagnosis of AIP. 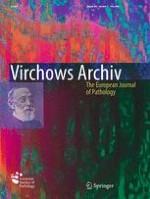 Transcription factors Snail, Slug, Twist, and SIP1 in spindle cell carcinoma of the head and neck

Histopathology report of cutaneous melanoma and sentinel lymph node in Europe: a web-based survey by the Dermatopathology Working Group of the European Society of Pathology