Joubert syndrome (JS) and related disorders (JSRD) are a group of multiple congenital anomaly syndromes in which the diagnostic hallmark is the molar tooth sign (MTS), a complex midbrain malformation visible on brain imaging. Detection of the MTS should be followed by a diagnostic protocol to assess multi-organ involvement. The incidence of JSRD ranges between 1/80,000 and 1/100,000 live births, although these values may represent an underestimate. The neurological components of JSRD include hypotonia, ataxia, intellectual disability, abnormal eye movements, and neonatal breathing problems. These may be associated with multi-organ involvement, mainly retinal dystrophy, nephronophthisis, hepatic fibrosis, and polydactyly. With the exception of rare X-linked recessive cases, JSRD follow autosomal recessive inheritance and are genetically heterogeneous. Ten causative genes have been identified to date, all encoding for proteins of the primary cilium, making JSRD part of a group of diseases called “ciliopathies”. Analysis of causative genes is available in few laboratories worldwide on a research basis. The differential diagnosis must consider, in particular, the other ciliopathies, distinct cerebellar and brainstem congenital defects, and disorders with cerebro–oculo–renal manifestations. Recurrence risk is 25% in most families, although X-linked inheritance should also be considered. Optimal management requires a multidisciplinary approach, with particular attention paid to respiratory problems in neonates. After the first months of life, the prognosis varies among JSRD subgroups, depending on the extent and severity of organ involvement. 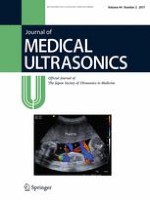 A new world for locomotor organs brought about by portable echography

Report of The 89th Annual Scientific Meeting of the Japan Society of Ultrasonics in Medicine, The 12th Congress of the Asian Federation of Societies for Ultrasound in Medicine and Biology, and The 8th Asian Conference on Ultrasound Contrast Imaging (Ultrasonic Week 2016)