Role of 18-FDG PET/CT had been well established in other more prevalent malignancies such as colorectal and lung cancer; however, this is not as well defined in cholangiocarcinoma. Literature focusing on the prognostic values of preoperative PET/CT for resectable cholangiocarcinoma is scarce.

This is a retrospective cohort of 66 consecutive patients who had received curative resection for cholangiocarcinoma from 2010 to 2015. All patients had preoperative 18-FDG PET/CT performed. Accuracy of metastatic lymph node detection of PET/CT and the prognostic value of maximum standard uptake value (SUV-max) was explored.

PET/CT is a reliable imaging modality for metastatic lymph node detection in cholangiocarcinoma. Tumour SUV-max is an independent factor for oncological outcomes in patients with resectable disease. For patients who have TNM stage I or II cholangiocarcinoma, tumour SUV-max over 8 is associated with significantly inferior disease-free and overall survival even after curative resection. 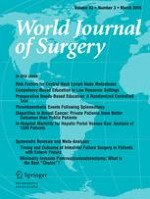 The Met Needs for Pediatric Surgical Conditions in Sierra Leone: Estimating the Gap

Acute Appendicitis: Still a Surgical Disease? Results from a Propensity Score-Based Outcome Analysis of Conservative Versus Surgical Management from a Prospective Database

Mortality in Patients with Splenic Injuries: The Role of Multi-Organ Failure