Ethyl glucuronide (EtG) in hair has emerged as a useful biomarker for detecting alcohol abuse and monitoring abstinence. However, there is a need to establish a reliable cutoff value for the detection of chronic and excessive alcohol consumption.

One hundred and twenty-five subjects were classified as teetotalers, low-risk drinkers, at-risk drinkers, or heavy drinkers. The gold standard for subjects' classifications was based on a prospective daily alcohol self-monitoring log. Subjects were followed for a 3-month period. The EtG diagnostic performance was evaluated and compared with carbohydrate-deficient transferring (CDT) and the activities of aspartate aminotransferase, alanine aminotransferase, and γ-glutamyl-transferase (γGT).

Hair EtG definitively provides an accurate and reliable diagnostic test for detecting chronic and excessive alcohol consumption. The proposed cutoff values can serve as reference for future cutoff recommendations for clinical and forensic use. 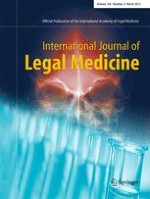 Y-STR variation in the Basque diaspora in the Western USA: evolutionary and forensic perspectives