The aim of this study was to determine an appropriate cutoff value and the number of nights of sleep with the portable single-channel EMG device (GrindCare) necessary for a valid sleep bruxism (SB) diagnosis.

Twenty consecutive post-graduate students and staff at Bauru School of Dentistry composed the sample. Each participant underwent the GrindCare for five consecutive nights and the polysomnography (PSG). The discrimination between bruxers and non-bruxers was based only on the PSG analysis. Data about electromyography per hour with GrindCare (EMG/h) and PSG (bursts/h) were scored.

There were positive correlations between the two devices for EMG/h and bursts/h in three and five consecutive nights. Bland-Altman analysis of the EMG bursts/h showed positive agreement between the methods. The receiver operating characteristic (ROC) analyses also showed that using a minimum of 18 EMG/h for three nights and 19 EMG/h for five nights in GrindCare as cutoffs resulted in a 90 % specificity and positive likelihood ratio equal to 5.

GrindCare is able to discriminate SB diagnosed by PSG and gold standard criteria, when used for three or five consecutive nights, and it may be a valid choice in clinical practice for SB assessment. 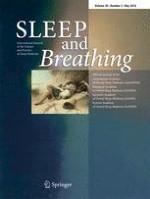 Sleep architecture and obstructive sleep apnea in obese children with and without metabolic syndrome: a case control study