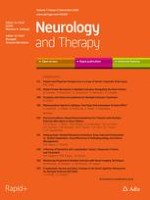 Injection of Onabotulinum Toxin A into the Bilateral External Oblique Muscle Attenuated Camptocormia: A Prospective Open-Label Study in Six Patients with Parkinson’s Disease

Real-World Observational Evaluation of Hair Thinning in Patients with Multiple Sclerosis Receiving Teriflunomide: Is It an Issue in Clinical Practice?

Letter to the Editor Regarding: A Comprehensive Review on Copemyl®

A Review of Dementia with Lewy Bodies' Impact, Diagnostic Criteria and Treatment

Acknowledgement to Authors, Referees, and Readers