The purpose of this study was to investigate if diet-induced obesity (DIO) and subsequent low-level systemic inflammation would result in local increases in pro-inflammatory mediators in the vitreous humour (VH) of the eyes of rats.

Sixteen male Sprague–Dawley rats were fed a high-fat/high-sucrose (n = 9) or chow control-diet (n = 7) for 12-weeks. RT-qPCR was conducted on RNA from VH cells and a 27-plex Luminex® Assay was conducted on VH fluid and serum.

DIO-related metabolic disturbances disrupt VH homeostasis in a manner that reflects development of a pro-inflammatory environment. Prolonged exposure to such an environment may lead to overt pathologies with compromised eye function. 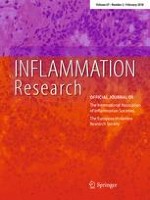 Effect of roxithromycin on mucosal damage, oxidative stress and pro-inflammatory markers in experimental model of colitis