Arsenic is widely distributed in nature, and the general population is exposed to arsenic through air, drinking water, food, and beverages [ 1]. The International Agency for Research on Cancer documented that arsenic is a group 1 human carcinogen, and there is sufficient evidence to establish that arsenic in drinking water causes cancers of the urinary bladder, lung, and skin in humans [ 2]. However, most previous studies were conducted among highly exposed populations, namely workers with occupational exposure or drinkers of contaminated well water in Taiwan [ 3– 9], Japan [ 10– 12], Chile [ 13, 14], Argentina [ 15– 17], and Bangladesh [ 18].
Although the Japanese Water Supply Law and Ordinance presently restricts arsenic concentration in drinking water to less than 0.01 mg/L, Japanese people commonly consume various seafood and seaweeds which accumulate arsenic [ 1]. In one study, mean arsenic levels in foods commonly consumed by Japanese were two times higher than those in Western countries, for example, the USA, Canada, and Sweden [ 19]. Although seafood and seaweeds generally contain almost completely nontoxic organic arsenic, for example, arsenosugars [ 20], arsenosugars detected in seaweeds are metabolized to dimethylarsinic acid in humans, which is more toxic than arsenosugars [ 21]. Additionally, the edible seaweed hijiki (Hizikia fusiforme), which is often consumed by Japanese people, contains toxic inorganic arsenic [ 22– 24]. However, the effects of arsenic and inorganic arsenic exposure from food on health are still unknown. The possible effects of arsenic and inorganic arsenic on cancer risk are therefore an important public health issue among Japanese, who have relatively high arsenic exposure from food.
Anzeige
Here, we investigated the association between arsenic intake and subsequent cancer in a large prospective cohort study in Japan.

The Japan Public Health Center-based (JPHC) Prospective Study was launched from 1990 for Cohort I and from 1993 for Cohort II. The study design has been described in detail previously [ 25]. The participants were recruited in five Public Health Center (PHC) areas (Iwate, Akita, Nagano, Okinawa, and Tokyo) for Cohort I, and in six PHC areas (Ibaraki, Niigata, Kochi, Nagasaki, Okinawa, and Osaka) for Cohort II. In the present analysis, Tokyo subjects were not included in data analyses because incidence data for them were not available. This study was approved by the institutional review board of the National Cancer Center, Tokyo, Japan.
The cohort participants responded to a self-administered questionnaire at baseline in 1990 (Cohort I) and 1993 (Cohort II). A five-year follow-up survey was conducted in 1995 (Cohort I) and 1998 (Cohort II). The five-year follow-up survey included more comprehensive information on food intake frequency than the baseline survey and accordingly was used as baseline (starting point) for the present study. The questionnaire also included information on medical history and lifestyle factors, such as smoking, alcohol drinking, and others. After exclusion of 11,933 persons who had died, moved out of a study area, or were lost to follow-up before the starting point, the remaining 121,143 subjects were eligible for participation. Of these, 98,513 subjects responded (46,028 men, 52,485 women; response rate 81.3 %) and were included in the present study.

A self-administered food frequency questionnaire (FFQ) in the 5-year follow-up survey had 138 food and beverage items with standard portions/units and nine frequency categories. A standard portion size was specified for each food item, and respondents were asked to choose their usual portion size from three options (less than half the standard portion size, standard portion size, or more than 1.5 times the standard portion size).
Anzeige
We selected items containing arsenic based on items common to our FFQ and reports from the Ministry of Agriculture, Forestry and Fisheries of Japan [ 26] and from Ishizaki et al. [ 27]. Average concentrations reported in these studies were from at least five items in each food. The following 12 food groups (75 items) were then selected: rice (3 items: “boiled rice,” “boiled rice cooked with millet or barley,” and “rice cake”); wheat (6 items: “bread,” “noodle (in Okinawa),” “wheat noodle,” “Chinese noodle,” “biscuit,” and “cake”); soybeans (7 items: “ tofu, ” “ yushidofu [predrained tofu],” “ koyadofu [freeze-dried tofu],” “ aburaage [deep-fried tofu],” “ natto [fermented soybean],” “miso [fermented soybean paste],” and “soy milk”); potatoes (3 items: “potato,” “sweet potato,” and “taro”); vegetables, including mushrooms (19 items: “Chinese radish,” “pickled Chinese radish,” “carrot,” “cabbage,” “broccoli,” “Chinese cabbage,” “lettuce,” “spinach,” “onion,” “cucumber,” “pickled cucumber,” “pickled eggplant,” “tomato,” “tomato juice,” “sweet pepper,” “shiitake mushroom,” “garland chrysanthemum,” “pumpkin,” and “shimeji mushroom and enoki mushroom”); fruits (12 items: “strawberry,” “apple,” “orange,” “persimmon,” “kiwifruit,” “melon,” “banana,” “pear,” “grapes,” “pineapple,” “apple juice,” and “orange juice”); seafood (13 items: “bonito,” “tuna,” “sea bream,” “horse mackerel,” “saury,” “squid,” “prawn,” “crab shell,” “canned tuna,” “ chikuwa, fish paste product,” “ kamaboko, fish paste product,” “flatfish,” and “mackerel”); seaweeds (2 items: “ wakame, brown seaweed; and kombu, kelp” and “ Nori, dried laver seaweed”); hijiki (1 item: hijiki); meats (5 items: “chicken,” “pork,” “beef,” “chicken liver,” and “pork liver”); eggs (1 item: egg); and dairy products (3 items: “milk,” “cheese,” and “butter”). Arsenic intake was calculated by multiplying the average arsenic concentration in each item by the quantity of each item. We used average arsenic concentrations based on reports from the Ministry of Agriculture, Forestry and Fisheries of Japan [ 26] and from Ishizaki et al. [ 27]. The amount of each food consumed (grams/day) was calculated from responses in the FFQ, and total arsenic intake from food was calculated by summing arsenic intake from each item. None of the regions in which our cohorts resided are reported to be arsenic-contaminated areas, other than Niigata Prefecture. However, the Japanese Water Supply Law and Ordinance concerning water limits arsenic in drinking water to less than 0.01 mg/L. Further, wells are not generally used, and the diffusion rate of municipal water supply is more than 99.9 % in the cohort area in Niigata (both data from the cohort area in Niigata) [ 28]. We therefore excluded arsenic in drinking water from consideration. Additionally, we calculated inorganic arsenic intake using reports from the Food Safety Commission of the Cabinet Office [ 29]. The proportion of inorganic arsenic to total arsenic among food groups is as follows: 86 % in rice, 73 % in hijiki, 10 % in seaweeds other than hijiki, and 5 % in seafood. The proportion of inorganic arsenic to total arsenic among other food groups is assumed to be 100 %, because these are unknown [ 29].
Of the 98,513 subjects who completed the questionnaire, we exclude those with a history of cancer ( n = 2,228) and those who reported extreme total energy intake (lower and upper 2.5 percentiles: 990 and 4,204 kcal/day in men and 837 and 3,685 kcal/day in women, respectively), leaving 90,378 subjects for final analysis, including 7,002 with cancer. Energy intake was calculated using the Fifth Revised Edition of the Standard Tables of Food Composition in Japan [ 30].
To evaluate the validity of energy-adjusted arsenic intake, we compared estimates from the FFQ with 28-day (or 14-day for the Okinawa PHC area) dietary records from a subsample of the cohort. Spearman’s rank correlation coefficients for arsenic and inorganic arsenic were 0.30 and 0.33 in men and 0.15 and 0.19 in women, respectively.

Follow-up and identification of cancer cases

We followed up all registered cohort subjects from the starting point until 31 December 2008. Residency registration and death registration are required by the Basic Residential Register Law and Family Registry Law, respectively, and the registries are thought to be complete. During the follow-up period in the present study, 9,370 subjects died, 2,951 moved out of the study area, and 298 (0.3 %) were lost to follow-up.
The occurrence of cancer was identified by active patient notification from major local hospitals in the study area and from data linkage with population-based cancer registries, with permission from each of the local governments responsible for the cancer registries. Information on the cause of death was supplemented by death certificate information, with permission. Cases were coded using the International Classification of Diseases for Oncology, Third Edition (ICD-O-3). The proportion of cases ascertained by death certificate only (DCO) was 6.1 %. These ratios were considered satisfactory for the present study. For the present analysis, the earliest date of diagnosis was used in cases with multiple primary cancers diagnosed at different times.

Person-years of follow-up were calculated for each subject from the date of the starting point to the date of cancer diagnosis, date of relocation from the study area, date of death, or end of the study period (31 December 2008), whichever occurred first. For subjects who were lost to follow-up, the last confirmed date of presence in the study area was used as the date of censor.
The Cox proportional hazards model was used to estimate hazard ratios (HRs) and 95 % confidence intervals (CIs) of cancer by energy-adjusted arsenic intake using the SAS program (PROC PHREG) (SAS Institute Inc., Cary, NC, USA). Arsenic is included in a lot of foods, and thus increasing intake of various foods is speculated as increasing arsenic and energy intake. Thus, energy adjustment of arsenic intake was done using the residual method [ 31].
HRs were adjusted for the following potential confounding factors: age at the starting point (five-year groups), PHC area, smoking status (never, former, and current: <20, 21–40, or ≥41 cigarettes/d), alcohol intake (almost never, less than 3–4 times/week, and more than 5–6 times/week), body mass index (<21, 21–23, 23–25, and ≥25), and sports in leisure time (almost none, less than 1–2 times/week, and more than 3–4 times/week) in the analysis of the association between arsenic and cancer. Moreover, women were further adjusted for menopausal status (premenopausal and postmenopausal) and use of exogenous female hormones (yes or no). These variables, obtained from the questionnaire, are either known or suspected risk factors for cancer that have been identified in the previous studies. Furthermore, we adjusted for screening examination (chest radiograph, gastric radiograph, gastrointestinal endoscopy, fecal occult blood test, barium enema, colonoscopy for men and women, mammography, and Papanicolaou smear for women) and nuclear family (father, mother, brothers, and sisters) history of any cancer, but the results did not substantially change. Therefore, we did not adjust for screening examination or family history of cancer in the final model.
Anzeige
Because of potential synergistic effects between arsenic and smoking on lung cancer [ 6, 11, 18, 32], we then tested effect modification by smoking status (never and ever) through the addition of cross-product terms into the multivariate model. Trends were assessed by assignment of the ordinal value. All p values were two-sided, and statistical significance was determined at the p < 0.05 level. 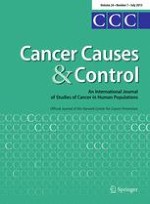 Impact of hormone replacement therapy use on mammographic screening outcomes

Decennial trends of social differences in smoking habits in Italy: a 30-year update