Diabetic chronic kidney disease (diabetic nephropathy) is the most common cause for end-stage renal failure and is associated with increased cardiovascular morbidity and mortality. Multiple interventions, including good control of blood pressure, blood glucose, and lipids, have been shown to slow its progression. Dietary management is being considered an adjunct to retard the progression of diabetic nephropathy. Several animal and human studies have evaluated the rationale and potential benefits of using various dietary interventions in patients with diabetic nephropathy. We provide an overview of the current evidence supporting the use of dietary measures in the management of diabetic chronic kidney disease. 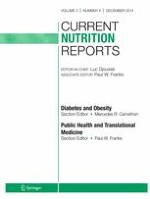 The Role of Protein and Carbohydrates for Long-Term Weight Control: Lessons from the Diogenes Trial

The Look AHEAD Trial: A Review and Discussion of Its Outcomes

The Intersection between Food Insecurity and Diabetes: A Review

Antenatal Dietary and Lifestyle Interventions for Women Who are Overweight or Obese: Outcomes from the LIMIT Randomized Trial