The symptoms of giant cell arteritis (GCA) and polymyalgia rheumatica (PMR) frequently overlap in the elderly. Whether there are differences in clinical features or prognosis between GCA patients with or without PMR remains unknown.

To identify differences in clinical manifestation and prognosis between Chinese GCA patients with or without PMR.

A retrospective study of patients diagnosed with GCA in Peking Union Medical College Hospital (PUMCH) during the last 20 years was conducted. Clinical data was collected and analyzed accordingly, and follow-up was performed.

A total of 50 patients had PMR, while 41 patients did not, with no significant differences in age, gender, and disease course between the two groups. GCA patients with PMR presented with higher risks of family history of malignancy (p = 0.048). Patients without PMR had higher proportion of hearing loss (p = 0.006), ANCA positive (p = 0.024), and abnormal imaging findings illustrating the involvement of arteries under aortic arch (p = 0.018). Before treatment, total lymphocyte counts in patients without PMR were lower than those with PMR, and monocyte counts in both groups were higher than normal. Acute phase reactants in patients without PMR were higher than the other group. No significant differences were found in prognosis during follow-up.

GCA patients with or without PMR have different clinical characteristics. Patients with PMR present myalgia or arthralgia more frequently, while those without PMR have higher inflammatory markers, lower lymphocyte counts, and wider involvement of arteries under aortic arch. 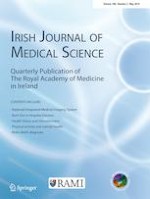 Lung metastases from benign uterine leiomyoma: does 18-FDG-PET/CT have a role to play?

Spiritual care in neonatology: analysis of emergency baptisms in an Irish neonatal unit over 15 years