Fusobacterium species are components of the normal microbiota of the oral cavity, gastrointestinal tract, and female genital tract. They are increasingly recognized as causative agents of oral, laryngeal, and tonsillar infections. Several fusobacterial species are involved in infections, with F. necrophorum and F. nucleatum being the most commonly cultured subtypes. In this study, we aimed to investigate clinical and prognostic differences in terms of mortality and association with malignancy between F. necrophorum and F. nucleatum detected by culture and 16S rRNA gene sequencing. This is a systematic, comparative, retrospective, non-interventional study. Data were extracted from the Department of Clinical Microbiology, Region Zealand, Denmark: all patients with F. necrophorum or F. nucleatum detected by culture or 16S rRNA gene sequencing from 1st of January 2010 to 30th of June 2015 were included. In total, F. necrophorum was detected in samples from 75 patients, and F. nucleatum in samples from 68 patients (total: n = 143). Thirteen patients had a current cancer diagnosis at the time of fusobacterial sampling. Multivariate analyses revealed a significant association of “current cancer” with 30-day mortality. Fusobacterial subtype was not associated with mortality neither in overall nor in subgroups with or without current cancer. Despite differences in clinical disease pattern between F. necrophorum and F. nucleatum, mortality was unaffected by fusobacterial subtype. Mortality was significantly related to comorbidity, especially a current diagnosis of cancer. Our data highlights the current debate whether fusobacterial involvement in cancer may have disease-altering properties, rather than being opportunistic pathogens secondary to cancer disease. 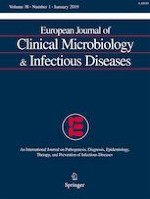 Correction to: Fidaxomicin for the treatment of Clostridium difficile infection (CDI) in at-risk patients with inflammatory bowel disease, fulminant CDI, renal impairment or hepatic impairment: a retrospective study of routine clinical use (ANEMONE)

Update on laboratory diagnosis of amoebiasis