To compare and evaluate effects of two DPP-4 inhibitors with different excretion routes on systemic and renal hemodynamics in Japanese patients with type 2 diabetes mellitus.

Seventy-three outpatients with type 2 diabetes who had been treated by 50 mg/day of sitagliptin (S) for at least 1 year were enrolled and prescribed 5 mg/day of linagliptin (L) instead of S for the next 1 year.

After the initiation of S, the systolic and diastolic blood pressure decreased significantly. However, after switching to L for 1 year they increased significantly and returned to a comparable level as those before S treatment. The increase in serum creatinine or uric acid levels and the decrease in eGFR after S initiation were completely stopped or reversed after switching to L. The change in eGFR after the initiation of S was negatively correlated with the eGFR value at 1 year before switching. 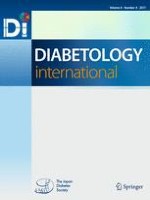 Effects of switching to low-dose rosuvastatin (5 mg/day) on glucose metabolism and lipid profiles in Japanese patients with type 2 diabetes and dyslipidemia: a single-arm, prospective, interventional trial

Report of the Committee