To determine and compare the biomechanical effects of single- and two-level anterior cervical decompression and fusion (ACDF) on the re-distribution of the segmental contribution to total cervical range of motion (ROM) in a prospective longitudinal design.

Fifty-one patients undergoing either a single- or two-level ACDF due to cervical disc disease were recruited. Functional radiographs were taken preoperatively and then at 3, 6 and 12-month follow-ups. Global ROM of C2–C7, ROM of the treated functional spinal unit (FSU) and the superior and inferior segmental ROMs were then measured. The relative contribution from the FSU and each of the adjacent segments to total cervical ROM were compared pre- and post-operatively within and between the two groups at each of the time points. 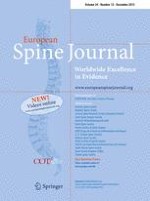 Feasibility and trajectory study of anterior transarticular crossing screw placement for atlantoaxial joint instability: a cadaveric study and description of a novel technique

Expert’s comment concerning Grand Rounds case entitled “Surgical challenges in the management of cervical kyphotic deformity in patients with severe osteoporosis: an illustrative case of a patient with Hajdu-Cheney syndrome” (T. A. Mattei, A. A. Rehman, A. Issawi, D. R. Fassett)

The evaluation of cervical spine mobility without significant spondylosis by kMRI