Seventeen term neonates with moderate or severe HIE underwent therapeutic hypothermia. They were examined by MRI twice at mean ages of 3 days and 10 days. We evaluated the presence of restricted diffusion, and also the presence or absence of pseudonormalization, by diffusion-weighted imaging at the time of the second MRI, and correlated the results with clinical outcome. 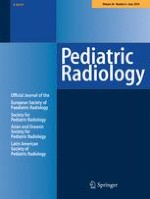 Do we need gadolinium-based contrast medium for brain magnetic resonance imaging in children?

Anatomy and injuries of the pediatric wrist: beyond the basics

Imaging of the knee in juvenile idiopathic arthritis

Equivalent success and complication rates of tunneled common femoral venous catheter placed in the interventional suite vs. at patient bedside