Diprosopus: a review of the aetiology and case report of early surgery in a 7-week-old infant with partial facial duplication | springermedizin.de Skip to main content
TOOLBAR 1 2 3 4
SUCHE MENÜ 1 2 3 4

Diprosopus is a rare craniofacial anomaly and is considered a subgroup of conjoined twinning. It encompasses a broad spectrum of duplications from single structure doubling to two completely formed heads on one neck. The aetiology of diprosopus remains a controversial topic, and many hypotheses exist. A multifactorial causal relationship is feasible because of the coexistence of other internal system anomalies of cardiac, gastrointestinal, neurological and respiratory origin. Ovid and PubMed databases were searched, using the key words: “diprosopus”, “craniofacial duplication” and “duplicated mandible”. The identified literature and key referenced articles therein were examined. The purpose was to consolidate the existing body of knowledge on the aetiology and management of diprosopus in order to improve our understanding of this rare condition. Our case report is relatively unique in that it represents a complete duplication of the mandible. Other tissues that were duplicated include the tongue, floor of mouth and the lower lip. It was hypothesised that associated growth abnormalities of the facial skeleton could undergo spontaneous correction if the duplicated mandible and associated tissues were excised early. On review, surgery is the only treatment that can offer functional, aesthetic and psychological improvement. Most patients who were offered surgery (in the reviewed literature) had a partial facial duplication. Surgery is usually deferred until the patient is older when more soft tissue is available to perform the reconstruction and when there would possibly be less growth restriction due to growth centre manipulation. This finding on the timing of surgery was in direct conflict with our hypothesis.
Level of Evidence: Level V, therapeutic study. 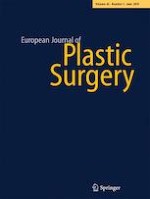 Correction to: Optimization of the dermal wrap in inferior pedicle reduction mammoplasty: An Egyptian experience