To standardize the methodology for conducting direct antimicrobial susceptibility testing (AST) of Enterobacterales and Pseudomonas aeruginosa causing bacteremia from positive blood culture pellets. Two methods for processing positive blood cultures with Enterobacterales and P. aeruginosa were compared: a conventional method for identification and AST versus a direct method obtaining a pellet for both matrix-assisted laser desorption/ionization–time of flight (MALDI-TOF) identification and direct AST. A total of 157 (145 Enterobacterales, 12 P. aeruginosa) positive blood cultures were included. Microorganism identification showed 100% concordance between both methods at species and genus level. Definitive AST results were obtained 24 h earlier with the rapid method than the conventional one (p < 0.001). Of the 2814 MICs generated, there were discrepancies with respect to the conventional method in 47 (1.7%), 0.3% being very major (VME) and 1.3% major (ME) errors. Better results for AST were obtained when colony counts with the pellet were ≥ 105 cfu/ml. The essential agreement (EA) for antibiotics tested in Enterobacterales was at least 97%, except for ampicillin (95%). Regardless of colony count, the greatest discrepancies were observed for first/s-generation cephalosporins and aminoglycosides. In P. aeruginosa, EA was at least 92%, except for piperacillin-tazobactam (84%) and cefepime (76%). No VME occurred except for ceftazidime (8%). ME occurred in piperacillin/tazobactam (16%), ticarcillin, ceftazidime, tobramycin, amikacin, and colistin (8% each). Direct use of the blood culture pellet permits fast AST in bacteremia of Enterobacterales, enabling the clinicians to perform an early treatment adjustment. However, for Pseudomonas aeruginosa, the data needs expanding to improve the reliability of this technique. 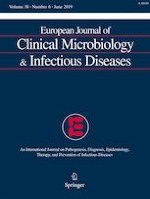 Coexistence of Candida species and bacteria in patients with cystic fibrosis

The possible zoonotic diseases transferring from pig to human in Vietnam