Data on the molecular epidemiology of Bordetella pertussis are limited in developing countries where whole-cell pertussis vaccines (WCVs) have been used. The aim of this study was to determine the genotypes of circulating B. pertussis in China by direct molecular typing of clinical specimens. DNA extracts of 122 nasopharyngeal swabs (NPs) positive for B. pertussis by polymerase chain reaction (PCR) (targeting IS481 and ptx-Pr) from 2012 to 2013 were used for typing using the multiple-locus variable number tandem repeat analysis (MLVA) and also by PCR-based multilocus sequence typing (MLST) of B. pertussis virulence genes (ptxP, prn, and fim3). One hundred and eight DNA extracts (89 %) generated a complete MLVA type (MT). Among the 18 MTs obtained, MT55 (52 %) and MT104 (13 %) were the most common. MT27, which is linked to the ptxP3 allele and is prevalent in many developed countries using acellular pertussis vaccines (ACVs), was only found in 7 (6 %) DNA extracts. Eighty-seven DNA extracts (71 %) produced a complete multiantigen sequence typing (MAST) type. Of them, 77 (89 %) had the ptxP1/prn1/fim3-1 allele profile. Four DNA extracts (5 %) had the ptxP3/prn2/fim3-2 profile and 3 (4 %) had the ptxP3/prn1/fim3-2 allele profile. These seven DNA extracts also harbored MT27. Our result shows that B. pertussis circulating in China was different from those found in countries where ACVs have been in use, supporting the notion that selection pressure induced by WCVs and ACVs on the bacterial population differs. 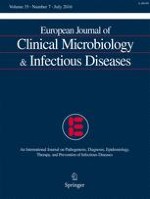 A systematic review and meta-analysis on Staphylococcus aureus carriage in psoriasis, acne and rosacea