Familial Mediterranean fever (FMF) is inherited autosomal recessively; however, heterozygotes may express FMF phenotype. We aimed to define the characteristics of FMF patients heterozygous for MEFV (MEditerranean FeVer) mutations in whom colchicine was stopped after a period of treatment, with close follow-up. We reviewed the charts of 182 children who were heterozygous for MEFV variants. We excluded the patients (n = 34) heterozygous for MEFV variants of unknown significance and patients with typical periodic fever, aphthous stomatitis, pharyngitis, and cervical adenitis syndrome (n = 2). All patients were followed up with their routine analysis and serum amyloid A levels every 6 months while on colchicine treatment and every 3–6 months thereafter. MEFV gene variant analysis was performed with Sanger sequencing. Twenty-two out of 146 heterozygotes initially had FMF phenotype, but colchicine was discontinued after a treatment period. The most common MEFV variant was M694V (86.3 %). The median age at diagnosis/initiation of colchicine was 76 (24–144) months. The median duration of colchicine treatment was 36 (24–110) months. The median age at colchicine cessation was 120 (55–172) months. At the time of colchicine cessation, the median attack- and inflammation-free period was 27 (24–84) months. The median follow-up after colchicine cessation was 22.5 (6–102) months. We re-started colchicine in only two patients because of recurrence of symptoms. Individuals with one mutation only can display FMF phenotype and require colchicine for the clinical and laboratory inflammation. However, in some of these patients, colchicine may be discontinued with very careful follow-up. 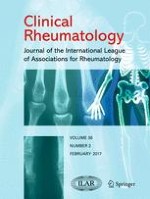 Methotrexate intolerance in the treatment of rheumatoid arthritis (RA): effect of adding caffeine to the management regimen

Interleukin 12B gene polymorphisms and susceptibility to rheumatoid arthritis: a data synthesis

Sulfasalazine induced immune thrombocytopenia in a patient with rheumatoid arthritis