Objective The aim of the study was to evaluate the antiproliferative potential of simple phenylboronic acid and benzoxaborole derivatives as well as to provide preliminary insight into their mode of action in cancer cells in vitro. Methods The antiproliferative activity was assessed in five diverse cancer cell lines via the SRB method (sulforhodamine B) or MTT (3-(4,5-dimethylthiazol-2-yl)-2,5-diphenyltetrazolium bromide) method after 72 h of treatment. Further studies of the mechanism of action consisted of the influence of the compounds on cell cycle progression and apoptosis induction, which was assessed by flow cytometry, caspase-3 enzymatic activity, fluorescence microscopy and western blot analysis. Results A clear structure-activity relationship was observed for both groups of compounds with several representatives evaluated as highly active antiproliferative agents with low micromolar \( {\mathrm{IC}}_{50}^{72\mathrm{h}} \) values. 2-Fluoro-6-formylphenylboronic acid (18) and 3-morpholino-5-fluorobenzoxaborole (27) exhibited strong cell cycle arrest induction in G2/M associated with caspase-3 activation in an A2780 ovarian cancer cell line. These events were accompanied by a mitotic catastrophe cell morphology and an increased percentage of aneuploid and tetraploid cells. Further experiments indicated that the compounds were phase cycle-specific agents since cells co-treated with hydroxyurea were less sensitive. The observed cell cycle arrest resulted from significant p21 accumulation and was associated neither with cyclin B1 nor β-tubulin degradation. Conclusion Phenylboronic acid and benzoxaborole derivatives were found to be highly promising antiproliferative and proapoptotic compounds with a cell cycle-specific mode of action. The presented data support their candidacy for further studies as a novel class of potential anticancer agents. 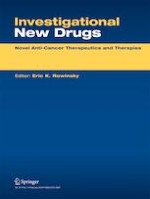 Phase Ib study of pevonedistat, a NEDD8-activating enzyme inhibitor, in combination with docetaxel, carboplatin and paclitaxel, or gemcitabine, in patients with advanced solid tumors