Recurrent glioblastoma is associated with a poor overall survival. Antiangiogenic therapy results in a high tumor response rate but has limited impact on survival. Immunotherapy has emerged as an efficient treatment modality for some cancers, and preclinical evidence indicates that anti-VEGF(R) therapy can counterbalance the immunosuppressive tumor microenvironment.

We collected peripheral blood mononuclear cells (PBMC) of patients with recurrent glioblastoma treated in a randomized phase II clinical trial comparing the effect of axitinib with axitinib plus lomustine and analyzed the immunophenotype of PBMC, the production of cytokines and expression of inhibitory molecules by circulating T cells.

Our results suggest that axitinib treatment in patients with recurrent glioblastoma has a favorable impact on immune function. At the time of acquired resistance to axitinib, we documented further enhancement of a preexisting immunosuppression. Further investigations on the role of axitinib as potential combination partner with immunotherapy are necessary. 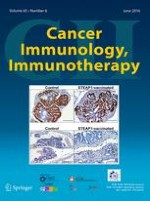 A case report of insulin-dependent diabetes as immune-related toxicity of pembrolizumab: presentation, management and outcome