Systemic lupus erythematosus (SLE) patients have a wide array of autoantibodies against nuclear antigens. The two predominant classes of these autoantibodies are directed either against dsDNA or RNA-associated antigens (extractable nuclear antigens; ENA). Nucleic-acid sensing Toll-like receptors (TLRs) that recognize dsDNA and RNA, have been well implicated in some murine models of SLE. We took up this study to identify if unique TLR expression patterns are associated with distinct autoantibody profiles in SLE.

We segregated the patients into three subsets distinguished on the basis of autoantibody response either against dsDNA or ENA or both. We determined the mRNA expression of TLR3, 7, 8, and 9 by real-time reverse-transcription PCR in peripheral blood leucocytes (PBLs) of the SLE patients of all three subsets. TLR7 and 9 protein expression was determined by western blotting in PBLs and by flow cytometry on B-cells and monocytes. The serum interferon-alpha (IFN-α) and anti-dsDNA/-ENA autoantibodies were detected using enzyme-linked immunosorbant assay. 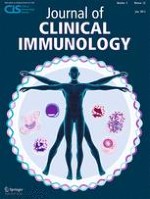 Effect of Hyperoxia on Pulmonary SIgA and Its Components, IgA and SC

Decreases in the Numbers of Peripheral Blood Regulatory T Cells, and Increases in the Levels of Memory and Activated B Cells, in Patients with Active Eosinophilic Granulomatosis and Polyangiitis