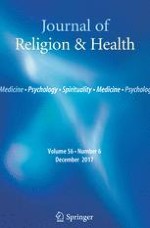 Religion in Motion: Continuities and Symbolic Affinities in Religion and Sport

The Relationship of Religious Comfort and Struggle with Anxiety and Satisfaction with Life in Roman Catholic Polish Men: The Moderating Effect of Sexual Orientation