The genus Aeromonas is known to causes diseases such as food poisoning, sepsis, and wound infection. However, the mode of Aeromonas transmission from environment to humans is not clearly understood. To evaluate the health risks of Aeromonas spp. in environmental freshwater, the number, proportion and putative virulence factors of Aeromonas species were investigated in Okinawa Prefecture, Japan.

Environmental freshwater samples were collected from three dams, two springs and three private wells. Aeromonas strains were identified by the biochemical method and the viable count was calculated. The production of extracellular enzymes and the virulence genes were investigated for possessing putative virulence factors using representative isolates.

At least seven species of already-known Aeromonas isolates as well as unidentified Aeromonas spp. with/without arginin dehydrolase (ADH) exist in water at these sites. Aeromonas spp. was found to exist at over 1000 CFU/100 ml in one spring and two wells. A. veronii biovar sobria and A. jandaei were the predominant species in dams, and A. hydrophila and/or A. eucrenophila were predominant in wells. Almost all the sampled Aeromonas species produced protease, gelatinase, lipase, esterase and DNase, but A. caviae, A. caviae-like bacteria, and A. eucrenophila had low hemolytic activity. Most sampled A. hydrophila strains possessed both aerolysin gene (aer) and hemolysin gene (hlyA), but A. caviae and A. eucrenophila strains did not possess either gene.

Since these results indicated that several Aeromonas species having potential pathogenicity exist in environmental water in Okinawa, surveys are recommended as a public health measure. 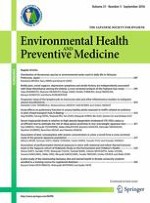 Frequency of RNF213 p.R4810K, a susceptibility variant for moyamoya disease, and health characteristics of carriers in the Japanese population