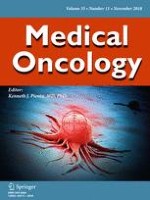 Prophylactic aprepitant is better than salvage for carboplatin-based chemotherapy: a propensity score-matched analysis

Comparison of the clinical outcomes of nilotinib and dasatinib therapies in newly diagnosed patients in the chronic phase of chronic myeloid leukemia: a retrospective analysis

The critical role of comorbidities and polypharmacy in lower risk myelodysplastic patients: is there any difference between countries?