Seeing or feeling a vaginal bulge is the most specific symptom for identifying prolapse. Bulge symptoms are becoming increasingly important as a surgical outcome measure. Our objectives were to identify patient characteristics associated with the symptom of a vaginal bulge and to determine whether those characteristics impact the relationship between symptoms and anatomic prolapse.

A cross-sectional analysis of new urogynecology patients was performed. Standardized history and examination forms were used. Patient characteristics associated with vaginal bulge at p ≤0.10 were entered in logistic regression models. Interactions between patient characteristics and prolapse were tested to determine whether patient factors modified the association between anatomic prolapse and symptoms.

We evaluated 685 patients with mean age of 58.5 years. Patients reporting a vaginal bulge were slightly older, more likely postmenopausal, and had greater parity and body mass index (BMI). They were more likely to report prior prolapse surgery (p <0.05) and more often previously underwent hysterectomy (p = 0.10). In multivariable analysis, prolapse, age group, and vaginal parity were associated with the bulge symptom. Receiver operating characteristic (ROC) area under the curve (AUC) was 0.87 [95 % confidence interval (CI) 0.84–0.90], suggesting good predictive value of maximum vaginal descent for a vaginal bulge symptom. The AUC for the youngest women was lower than for middle and older age groups (p < 0.01). The optimal cutoff for defining prolapse associated with a vaginal bulge symptom was the hymen.

Age and vaginal parity were independently associated with the vaginal bulge symptom. The level of vaginal descent did not predict a bulge symptom as accurately in younger patients. 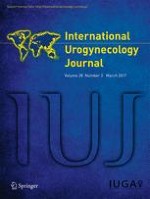 Vaginal prolapse in bladder exstrophy with complete duplication of the uterus

Does BMI, gender or age affect efficacy/tolerability of solifenacin in the management of overactive bladder?