main-content
nach oben
Zurück zum Suchergebnis
​
print
Inhaltsverzeichnis
​
insite
Ausgabenarchiv
​
archive
​
insite
Drucken
​
print
» Jetzt Zugang zum Volltext erhalten
Wichtige Hinweise
Each author certifies that he or she, or a member of their immediate family, has no commercial associations (eg, consultancies, stock ownership, equity interest, patent/licensing arrangements, etc) that might pose a conflict of interest in connection with the submitted article.
All ICMJE Conflict of Interest Forms for authors and Clinical Orthopaedics and Related Research editors and board members are on file with the publication and can be viewed on request.
Each author certifies that his or her institution approved the human protocol for this investigation, that all investigations were conducted in conformity with ethical principles of research, and that informed consent for participation in the study was obtained.

Diffuse-type pigmented villonodular synovitis (PVNS) has a high local recurrence rate and as such can lead to erosive destruction of the involved joint. Multiple surgical modalities exist, but it is unknown which technique best minimizes local recurrence and surgical morbidity.

We compared recurrence rates, arthritis progression, and complications between arthroscopic and open modalities for diffuse PVNS of the knee.

We retrospectively identified 103 patients with PVNS treated between 1993 and 2011. Of these, 48 had diffuse-type PVNS of the knee treated by all-arthroscopic, open posterior with arthroscopic anterior, or open anterior and open posterior synovectomy. We recorded patient demographics, treatment profiles, recurrence rates, and arthritic progression. Minimum followup was 3 months (median, 40 months; range, 3–187 months).

Recurrence rates were lower in the open/arthroscopic group compared with the arthroscopic or open/open groups: 9% versus 62% versus 64%, respectively. Arthritic progression occurred in 17% of the total study group with 8% going onto total knee arthroplasty within the followup period. We detected no difference between groups with regard to arthritic progression or progression to arthroplasty. The most common complication was hemarthrosis, which we drained in three patients (6% of the total study group), but there were no detectable differences between groups.

Open posterior with arthroscopic anterior synovectomy is a viable, comprehensive approach to diffuse PVNS of the knee and provides both low recurrence rates and a low postoperative complication profile. Greater numbers of recurrences may be partially explained in the arthroscopic group by technical challenges associated with posterior arthroscopic synovectomy and in the open/open group by selection bias toward more aggressive disease. 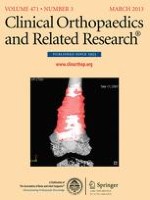 Symposium: Papers Presented at the 2011 ISOLS Meeting in Beijing, China

Primary Osseous Tumors of the Hindfoot: Why the Delay in Diagnosis and Should We Be Concerned?

CORR Insights™: Ultrasound as a First-line Test in the Diagnosis of Carpal Tunnel Syndrome: A Cost-effectiveness Analysis

Symposium: Papers Presented at the 2011 ISOLS Meeting in Beijing, China