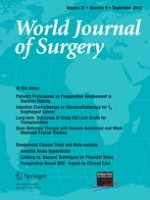 Surgical Correction of Main Stem Reflux in the Superficial Venous System: Does It Improve the Blood Flow of Incompetent Perforating Veins?

Management of Appendiceal Masses in a Peripheral Hospital in Nigeria: Review of Thirty Cases

Postlaryngectomy Voice Rehabilitation: State of the Art at the Millennium