Elective temporary clipping (ETC) is increasingly used in surgery for aneurysms. This study was to assess whether the impact of ETC on intraoperative aneurysmal rupture (IAR) translates into neurological outcome. 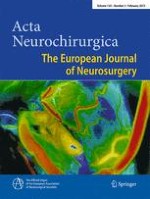 The diagnostic accuracy of brain microdialysis during surgery: a qualitative systematic review