Dopamine is the principal transmitter of several central nervous system pathways originating in the midbrain and critically involved in motor activity, learning and motivation, disruptions of which have been implicated in a number of disorders, including Parkinson disease and schizophrenia. Dopamine played a particularly significant role in the history of neurochemistry. Following a series of investigations between 1957 and 1965, commencing in the laboratory and completed in the clinic, the significance of chemical neurotransmission for normal CNS function was first demonstrated in the case of dopamine. 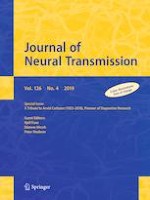 Journal of Neural Transmission: a scientific journal devoted since 1950 to the translation of neuroscience into clinical practice