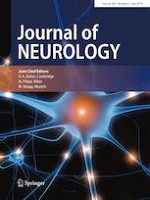 Clinical presentation of Moyamoya angiopathy in Europeans: experiences from Germany with 200 patients

What is the role of the cerebellum in the pathophysiology of dystonia?