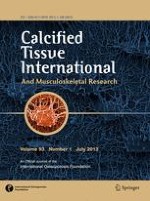 Incidence of Hip Fracture in Barranquilla, Colombia, and the Development of a Colombian FRAX Model

Reducing the Need for Central Dual-Energy X-Ray Absorptiometry in Postmenopausal Women: Efficacy of a Clinical Algorithm Including Peripheral Densitometry

The Association Between Osteoporosis and Hypertension: The Role of A Low Dairy Intake