The purpose of this study was to evaluate reconstruction of the medial patellofemoral ligament (MPFL) using the double-bundle anatomical or single-bundle isometric procedure with respect to the patients’ clinical outcomes.

According to the Kujala score and the subjective questionnaire score, the outcome of the double-bundle group was better than the outcome of the single-bundle group especially in the long-term. Patellar re-dislocation occurred in three patients in the group S, while no re-dislocation occurred in the group D. In total, 26.9 % of group S was considered to have patellar instability, compared to 4.54 % of the group D. After operation, the patellar tilt angle (PTA) and the patella lateral shift rate (PLSR) were restored to the normal range, with statistical significance (P < 0.05) compared to the preoperative state. 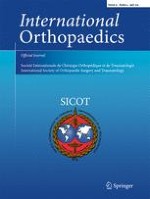 Double dome osteotomy for the treatment of cubitus varus in children

Total joint replacement and blood loss: what is the best equation?