Duplicate origin of the middle cerebral artery (MCA) is rare and has been misdiagnosed or confused as fenestration of the proximal M1 segment of the MCA. The condition is not a true fenestration and occurs when two MCA branches arise separately from the terminal segment of the internal carotid artery, and fuse to form an arterial ring. We researched our institutional records to determine the prevalence of such cases and investigated its characteristic features on magnetic resonance (MR) angiography.

To isolate these cases, we retrospectively reviewed cranial MR angiographic images of 3,491 patients obtained on either of two 1.5-tesla scanners at our institution from April 1, 2007 through December 31, 2009. 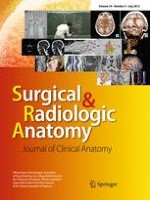 The demonstration of the number, course, and the location of nutrient artery canals of the femur by multidetector computed tomography

Anatomic variations of the renal vessels: focus on the precaval right renal artery