Deposition of amyloid-β (Aβ) in the brain parenchyma and vessels is one of the hallmarks of Alzheimer disease (AD). Recent observations of Aβ deposition in iatrogenic Creutzfeldt-Jakob disease (iCJD) after dural grafting or treatment with pituitary extracts raised concerns whether Aβ is capable of transmitting disease as seen in prion diseases by the disease-associated prion protein. To address this issue, we re-sampled and re-evaluated archival material, including the grafted dura mater of two cases with iCJD (28 and 33-years-old) without mutations in the AβPP, PSEN1 and PSEN2 genes, and carrying ε3/ε3 alleles of the APOE gene. In addition, we evaluated 84 dura mater samples obtained at autopsy (mean age 84.9 ± 0.3) in the community-based VITA study for the presence of Aβ deposition. We show that the dura mater may harbor Aβ deposits (13 %) in the form of cerebral amyloid angiopathy or amorphous aggregates. In both iCJD cases, the grafted dura mater had accumulated Aβ. The morphology and distribution pattern of cerebral Aβ deposition together with the lack of tau pathology distinguishes the Aβ proteinopathy in iCJD from AD, from that seen in young individuals without cognitive decline carrying one or two APOE4 alleles, and from that related to traumatic brain injury. Our novel findings of Aβ deposits in the dura mater, including the grafted dura, and the distinct cerebral Aβ distribution in iCJD support the seeding properties of Aβ. However, in contrast to prion diseases, our study suggests that such Aβ seeding is unable to reproduce the full clinicopathological phenotype of AD. 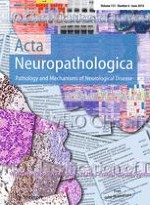 Risk stratification of childhood medulloblastoma in the molecular era: the current consensus