Distal radius fractures (DRF) are the most common fractures of the upper extremities. The incidence is expected to continue rising in the next years due to the increased life expectancy. Palmar locking plate stabilizing has since become the standard treatment for dorsally displaced DRF with a complication rate of 8–39% reported in the literature. Main aim of this study was to investigate the incidence of complications after DRF stabilization using palmar angular stable locking plate.

A retrospective medical records review conducted from January 2013 to December 2016 included a total of 392 patients with DRF, that were stabilized using palmar angular stable locking plate and showed a minimum follow-up of 3 months. The group comprised 259 female and 133 male patients with a mean follow-up interval of 11 months (range 3–52 months). All recorded complications were documented. Range of motion (ROM) in extension, flexion, supination, pronation, radial- and ulnar deviation of the last follow-up was noted. Age was divided into younger than 65 years (< 65 years) and older than 65 years (≥ 65 years). The primary, immediate postoperative and final checkup radiographs were scrutinized for alignment and intra-articular step-off.

Stabilization of DRF by palmar angular stable locking plate is a safe form of treatment. In the majority of the cases a good clinical and radiological outcome with no complications was documented. Gender and type of immobilization had no impact on the complication rate and an age over 65 years is not associated with an increased risk for complications or restricted ROM. 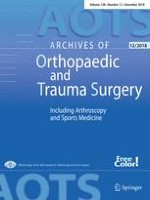 Is routine MRI necessary to exclude pathological fractures in patients with an oncological history?

Reverse shoulder arthroplasty: the role of physical therapy on the clinical outcome in the mid-term to long-term follow-up