Since progressive hemorrhagic injury (PHI) was introduced in neurosurgical literatures, several studies have been performed, the results of which have influenced doctors but do not define guidelines for the best treatment of PHI. PHI may be confirmed by a serial computerized tomography (CT) scan, and it has been shown to be associated with a fivefold increase in the risk of clinical worsening and is a significant cause of morbidity and mortality as well. So, early detection of PHI is practically important in a clinical situation.

To analyze the early CT signs of progressive hemorrhagic injury following acute traumatic brain injury (TBI) and explore their clinical significances, PHI was confirmed by comparing the first and repeated CT scans. Data were analyzed and compared including times from injury to the first CT and signs of the early CT scan. Logistic regression analysis was used to show the risk factors related to PHI.

A cohort of 630 TBI patients was evaluated, and there were 189 (30%) patients who suffered from PHI. For patients with their first CT scan obtained as early as 2 h post-injury, there were 116 (77.25%) cases who suffered from PHI. The differences between PHIs and non-PHIs were significant in the initial CT scans showing fracture, subarachnoid hemorrhage (SAH), brain contusion, epidural hematoma (EDH), subdural hematoma (SDH), and multiple hematoma as well as the times from injury to the first CT scan (P < 0.01). Logistic regression analysis showed that early CT scans (EDH, SDH, SAH, fracture, and brain contusion) were predictors of PHI (P < 0.01). 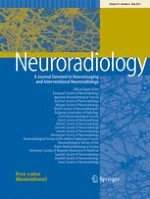 Presence of a central vein within white matter lesions on susceptibility weighted imaging: a specific finding for multiple sclerosis?