Fluid overload (FO) has been associated with an increased risk for adverse outcomes in critically ill patients. Information on the impact of FO on mortality in a general population of pediatric intensive care unit (PICU) is limited. We aimed to determine the association of early FO with the development of acute kidney injury (AKI) and mortality during PICU stay and evaluate whether early FO predicts mortality, even after adjustment for illness severity assessed by pediatric risk of mortality (PRISM) III. This prospective study enrolled 370 critically ill children. The early FO was calculated based on the first 24-h total of fluid intake and output after admission and defined as cumulative fluid accumulation ≥5 % of admission body weight. Of the patients, 64 (17.3 %) developed early FO during the first 24 h after admission. The PICU mortality rate of the whole cohort was 18 of 370 (4.9 %). The independent factors significantly associated with early FO were PRISM III, age, AKI, and blood bicarbonate level. The early FO was associated with AKI (odds ratio [OR] = 1.34, p < 0.001) and mortality (OR = 1.36, p < 0.001). The association of early FO with mortality remained significant after adjustment for potential confounders including AKI and illness severity. The area under the receiver operating characteristic curve (AUC) of early FO for predicting mortality was 0.78 (p < 0.001). This result, however, was not better than PRISM III (AUC = 0.85, p < 0.001).
Conclusion: Early FO was associated with increased risk for AKI and mortality in critically ill children. 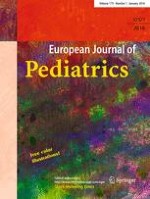 Childhood adiposity: being male is a potential cardiovascular risk factor