To determine the combined therapeutic effect of fractional carbon dioxide laser and silicone gel on fresh traumatic scars using a rabbit ear hypertrophic scar (EHS) model, as well as on human subjects. The rabbit EHS model was established by punching four circular wounds in each ear and respectively treated with carbon dioxide laser, silicone gel, and the combination of both, while one wound was left untreated. In addition, a validation group of five rabbits was also included wherein the wounds were treated with triamcinolone, IFN-α, and normal saline, with one untreated control. The gross hyperplasic changes and the histological features were analyzed, and the scar elevation index (SEI) was calculated for each treatment group. In the rabbit model, the untreated control wounds showed hypertrophic growth, whereas triamcinolone or IFN-α showed an inhibitory effect, similar to that on hypertrophic scars in humans, thereby proving the feasibility of our animal model. The SEI peaked 2 months after treatment and was respectively 2.28 ± 0.56, 1.85 ± 0.33, 1.91 ± 0.34, and 1.45 ± 0.22 in the untreated control, and the silicone, laser, and combined treatment groups, clearly indicating a significant therapeutic effect of the combined treatment modality (p < 0.01). The fibroblast and microvascular counts also showed similar trends in each group. Early application of fractional carbon dioxide laser can prevent hypertrophic scars; the combined use of laser and silicone gel was more effective with less recovery time, thereby worthy of clinical promotion. 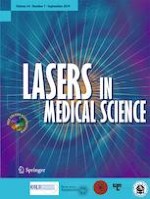 Influence of Er:YAG laser pulse duration on the long-term stability of organic matrix and resin-dentin interface